It is with deep sadness that we announce the passing of our dear friend and one of Phillips Murrah’s founding Partners, Robert N. Sheets.

Bob was a member of the Firm’s commercial litigation practice group and received the Outstanding Law Review Alumni Award from Oklahoma City University School of Law in 2007, The Journal Record’s Leadership in Law Award in 2008, and The Alma Wilson Award from the Oklahoma Bar Association in 2011. Bob, aka “the Reading Man,” was also dedicated to volunteering on behalf of children and his community.

He will be dearly missed.

Please see his obituary listed below: 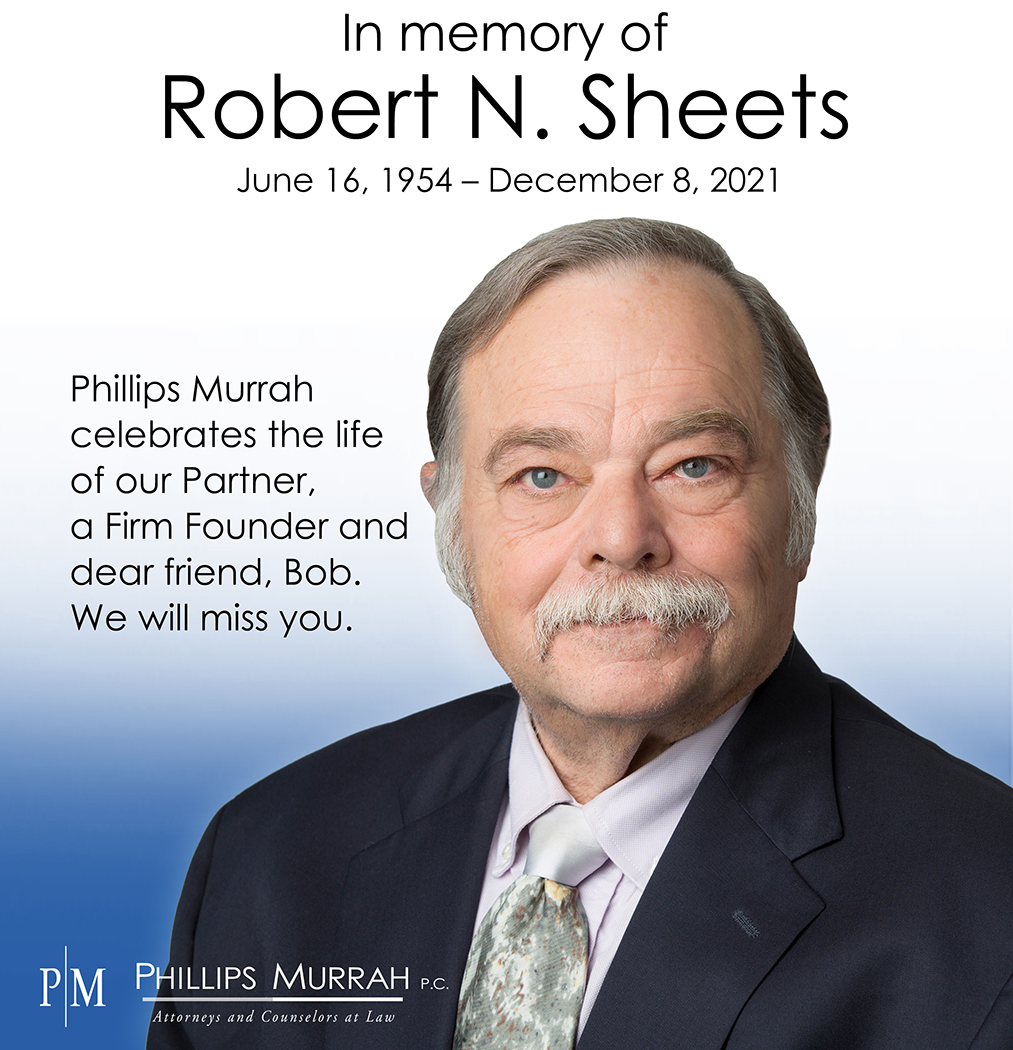 Robert Noel Sheets was born June 16, 1954 in St. Louis, MO to Robert Lee Sheets and Betty Sue Read Sheets. He passed into life eternal on December 8, 2021. Bob grew up in Florissant, MO, where he was active in DeMolay. He graduated from McCluer High School, Washington University in St. Louis, and finally Oklahoma City University School of Law in 1979. He married Mary Patricia Flanagan in 1981. His parents preceded him in death. He leaves his wife, daughter Alison, son John and his wife, Alexis, and two grandchildren, Eli Sheets and Luna Sheets, as well as numerous cousins and friends.

Bob was a founding partner of the original law firm McFall, McVay, Sheets, Lovelace and Juras (interestingly, Kristen Juras is the current lieutenant governor of Montana). The firm is known now as Phillips Murrah. Bob retired from the firm in 2020, and since then was an adjunct professor of law at Oklahoma City University.

Next to the Lord and his family, Bob’s love in life was the St. Louis Cardinals. He was a fan throughout his life. In childhood, he won a game ticket most years for earning straight A’s in school. He loved taking his family to games, and was a regular season-long viewer of Cardinal games on TV.

He was also a history buff, especially about the Civil War. Numerous family vacations were trips to Civil War battlefields. He could spend hours strolling in museums and looking at monuments, and he readily entered discussions with park rangers about history.

Bob was active in the church and community. He held numerous leadership positions at Wesley United Methodist Church, and taught the lnspirers Sunday School class. He was a board member for several years with Heartline, and a longtime volunteer in the Oklahoma Bar Association’s education outreach efforts. He taught “The Law and You” short courses for high school students, and read to preschoolers at Head Start locations in Oklahoma City. He recently volunteered for TEEM, The Education and Employment Ministry.

Most of all, Bob was a family man. He loved his wife of forty years dearly, as well as his children and grandchildren, on whom he bragged every chance he got. When his children were young, he coached their YMCA baseball and Little League baseball teams. He had great relationships with them into adulthood. He could speak for hours with his daughter’s Austrian boyfriend, Max, teaching him about baseball and American history. He was delighted when Alexis joined the family through marriage to John, and enjoyed the relationships with the Hahn in-laws. He was thrilled at the birth of his grandchildren, Luna and Eli, and loved being with them.

Blocks for Bucks nears season half mark with $5200 to benefit Thunder Cares...