Melissa Gardner is a Director who practices in the Energy & Natural Resources Practice Group. She represents both privately-owned and public companies in a wide variety of oil and gas matters, with a strong emphasis on oil and gas title examination.

Director Melissa R. Gardner participated in a seminar in September for the Oklahoma Bar Association’s Continuing Legal Education individuals focusing on matters relevant to the oil and gas industry in Oklahoma.

“My presentation covered the statutory landscape for Native American law,” Gardner said. “I discussed all of the Congressional acts that control the United States’s legal position in regards to the tribes.”

On the topic of tribes, Gardner addressed the most recent Supreme Court case involving the tribes, Sharp v. Murphy, and emphasized possible, incredible implications on the state of Oklahoma and 19 million acres lying East of Oklahoma City.

The case is pending and raises the question of whether Congress disestablished the Muscogee Nation reservation. Click here for more information on issues surrounding the case.

Gardner is a Director and an attorney in the Energy & Natural Resources Practice Group. She represents energy companies in a variety of matters in both Oklahoma and Texas.

When a landowner leases property to an energy company, the lease agreement typically contains a held-by-production provision, also known as a habendum clause. In Oklahoma, habendum clauses in oil and gas leases establish that after the primary lease term has ended, the lease shall remain in force as long as the land is capable of producing a minimum amount of oil or gas. But how do courts decide whether to hold or end such a lease?

Habendum clauses typically describe the lease term as, “from the date hereof and as long thereafter as oil or gas … is produced from said land.” When the term “produced” is used in a “thereafter” provision of the habendum clause, it has been determined by courts to mean production in “paying quantities.”

However, “paying quantities” is not determined by a specific dollar amount. Rather, it is defined as an amount of production sufficient to yield a profit to the lessee beyond lifting expenses, which include costs of operating the pumps, gross production taxes and electricity.

To determine whether a lease is commercially producing and, therefore, may be held by production, there are four factors that courts take into account: the accounting period, revenue during that period, expenses during that period, and equitable considerations.

The accounting period chosen for any production analysis varies and is determined by examining facts and circumstances specific to the lease. Accounting periods can make or break a case when trying to ascertain whether there was production in paying quantities. Thus, to reflect the production status, it is crucial to determine a sufficient amount of time that would provide information that would allow a “reasonable and prudent operator” to decide whether to continue or cease operation.

Once an accounting period is established, all revenue generated by the lease during that period is considered. Next, lifting expenses are considered and compared against revenue to see which is greater. However, this consideration does not include overriding royalties, overhead, and depreciation.

Lastly, if the lease is unprofitable, the court will examine any equitable considerations to determine if any justify maintaining the lease. These considerations are very specific to the circumstances of the lease that may affect profitability, which could include market conditions, changes in public policy, pipeline access, and conflict resolution activity.

If, after examining all factors, it is determined that the oil and gas lease is returning a profit over lifting expenses, the lease will not be vulnerable to termination and shall be allowed to continue beyond the primary lease term.

Originally published in The Journal Record on July 5, 2019. Directors Robert N. Sheets and Melissa R. Gardner will give presentations June 12 and 13, respectively, at the National Business Institute’s seminar “Title Law: A to Z” for Continuing Legal Education professionals on issues relating to title law.

Those interested in registering can get more information at www.nbi-sems.com. Attendees receive CLE credit for participating.

Q: Why should surface owners be concerned about the development of oil and gas?

A: In Oklahoma, courts have ruled that the mineral estate is superior to the surface estate for purposes of oil and gas development. Oil and gas operators have the right to enter upon your property and make reasonable use of the surface to explore for oil and gas.

Q: As a surface owner in Oklahoma, what laws are in place to protect my interests?

A: In an effort to better protect the rights of surface owners throughout the state, the Oklahoma Legislature passed the Surface Damage Act that went into effect on July 1, 1982. Prior to July 1, 1982, operators had the right to enter upon an Oklahoma surface owner’s property and make reasonable use of it to conduct their operations without paying any damages. With the passage of the Surface Damage Act, surface owners were afforded more protections and operators were required to follow procedural steps as defined under the act before entering upon the property.

Q: What procedural requirements does an operator have to meet?

A: Operators are first required to send a letter by certified mail providing notice of their intent to drill and informing the Oklahoma surface owner of the proposed location of the well and the approximate date drilling will commence. Within five days of delivery, the operator must engage in good-faith negotiations with the surface owner. If the parties agree upon damages, a written contract is executed, damages are paid, and drilling operations can commence.

Q: What if the surface owner and operator don’t reach an agreement?

A: If the good-faith negotiations don’t result in an executed damages contract, the operator must petition the court for the appointment of appraisers. Then, an operator may enter the property and commence its operations. Although drilling may be commenced, the determination of surface damages will remain before the court. The three appraisers (one from each party, who then choose a third) will inspect the property and submit a report to the court estimating the surface damages. Once the report is submitted, you can accept the suggested amount or challenge in court. Before you demand court consideration, you should make yourself aware of the related costs.

A: Goods and equipment used in a manufacturing operation can be purchased exempt from sales and use tax by manufacturers. This type of sales tax exemption is designed to attract and promote business. It’s a proven tool that governments employ to make their communities more attractive. The rationale is simple: draw out-of-state investment and keep in-state investment rather than relinquishing that investment (and the associated jobs, taxes and infrastructure) to a competing location.

Q: What is the relevance of the manufacturing sales tax exemption to the energy industry in Oklahoma?

A: Under Oklahoma law, the term “manufacturing” includes the conversion of materials and natural resources into other materials that have a different form or use. This definition encompasses processes ranging from the manufacturing of oil field equipment to petroleum refining. Electric power generation is also considered manufacturing. As a result, power generators such as natural gas-fired power plants, coal-fired power plants and wind energy facilities are deemed manufacturers and are permitted to purchase equipment to be used in the power generation process exempt from sales and use tax. Ultimately, the exemption is designed to help qualifying energy companies stay afloat — especially during capital-intensive phases — and keep investing in Oklahoma.

Q: This exemption has been a hot topic at the state Capitol during special legislative session. What are some of the issues at hand?

A: Oklahoma is facing a historic budget shortfall, with risks of further cuts to state agencies becoming a very real possibility. Legislators are searching for dollars to help plug financial holes before the ship sinks, and many of our state’s tax incentives and exemptions may be on the chopping block. There has been discussion of removing wind energy companies from access to the manufacturing sales tax exemption. While wind developers have made it publicly clear they’re already invested in Oklahoma to the tune of billions and plan to stay for the long haul, it’s important to revisit the reason for such exemptions in the first place and consider that the opposite is also true: if certain companies or industries are punitively cut out of such exemptions while still paying millions in taxes, it may make Oklahoma a difficult place to do business, which will, in the long run, discourage investment and aggravate our state’s budget problems. 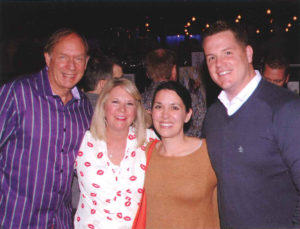 Arriving early to the April 1 event at the Bricktown Events Center, Nikki and Marc volunteered at the check-in table and worked a games table throughout the night.

“While I support many Oklahoma City and Oklahoma state causes, I’m always happy to lend my time and resources to this great cause and this top-notch school,” Nikki said.

The Edwards have an 8-year-old son who attends Westminster School in Oklahoma City.

At Phillips Murrah, Nikki heads up the Family law Practice Group where she provides objective, compassionate and experienced guidance in domestic matters that lead to separation or divorce and other family law-related matters. Marc, who leads the Firm’s Government Relations and Compliance Practice Group, represents business and public entities in a broad range of litigation, administrative proceedings and strategic legal matters, with an emphasis on public utility, public pension, governmental and administrative laws.

While not practicing law, the Edwards’ spend their free time volunteering, attending field trips, and supporting the school.